Boise’s District 15 is one of the central battlefields of the 2018 election.

Idaho is blessed to have three strong pro-Life incumbents running again: Sen. Fred Martin, Rep. Pat McDonald and Rep. Lynn Luker. All three have made substantial contributions to the defense of preborn babies during their years at the Idaho Legislature.  And all three are under intense attack from the Abortion Lobby.

Sen. Fred Martin, for example, was the lead sponsor this past session of one of the most important pieces of legislation ever considered in Idaho: For the first time, there will be an independent and comprehensive reporting system, managed by the State of Idaho, on the complications women and girls suffer after an abortion. No longer will we be totally dependent on the manipulated data produced by Planned Parenthood. The Abortion Industry is terrified by what the public might learn about abortion in coming years.

Martin is being challenged by a leftist Democrat, Jim Bratnober, who is proudly campaigning as a candidate endorsed by NOW. The National Organization for Women is, perhaps, even more radical on abortion rights than Planned Parenthood.  They are part of the Abortion Lobby we encounter every time we bring pro-Life legislation to the fore.  He has raised over $57,000 and has been doorknocking the district for months.

In fact, every Democrat challenger is loaded with money and hungry to claim the last Republican district in Boise.

Rep. Pat McDonald has a 100% pro-Life record, built during his three terms of public service in the Idaho House. We are proud to support his re-election.

He is being challenged by Democrat Jake Ellis. While we are impressed with his years as a Boise firefighter, it is important to understand that Mr. Ellis is a full-throated leftist.  He, too, is backed by NOW.  In fact, he goes even further in expressing his public support for Planned Parenthood and abortion-on-demand: 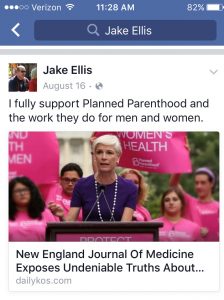 The last big race in District 15 involves Rep. Lynn Luker. He faces, for the fourth time, Democrat Steve Berch.  This guy is as obsessed with being elected to the Legislature as Hillary Clinton is with being president: Berch just won’t take ‘NO’ for an answer.

But this time around, he has raised over $100,000 – apparently figuring that overwhelming Luker with money is the only strategy left to him.

And Berch is getting plenty of assistance from Planned Parenthood: A consortium of leftist groups have banded together under the name “Stronger Idaho PAC” – mostly to disguise the financing by Planned Parenthood, the Idaho Conservation League and the state’s teacher union. They just spent thousands of dollars in independent expenditures attacking Lynn Luker.

We need pro-Life voters in District 15 to turn-out next week. This district has proven there is a close divide and these critical races could be determined by just a handful of voters.  If you care about women; if you care about the slaughter of the innocent; if you care about protecting the sanctity of the family – then you must get out and vote for Martin, McDonald and Luker.  Make sure that your vote is the one that settles the matter.  Your vote is the only defense left for babies in the womb.

Posted in Uncategorized | Comments Off on Battleground: District 15