An extraordinary, historic moment was seen in our nation’s capital yesterday. And we don’t refer to the kabuki theatre taking place on Capitol Hill.

For the first time in half a century, a sitting president addressed the annual March for Life. Despite the on-going carnage of legalized abortion, previous presidents have found it politically risky to join the great mass of unwashed as we plead for the lives of the next generation.

But this president is different. He is unafraid to be seen with us.  He is not intimidated by what the media or professional Left might say about him.  Donald Trump does not shrink from saying the hard thing and confronting those who would remake our culture and society into something shameful. 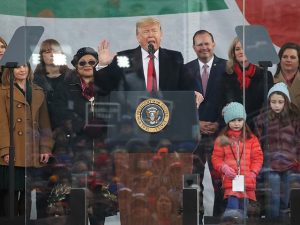 We are truly blessed to have a leader like President Trump.

And we must appreciate that the pro-Life movement has never been stronger. Hundreds of thousands of average Americans travelled to Washington for the chance to stand-up and be counted.  They refuse to submit to the dictates of the powerful forces which seek to normalize the slaughter of the innocent.  After some forty-seven years of unrelenting pressure and persuasion, the American people refuse to accept abortion as anything approaching “normal”. 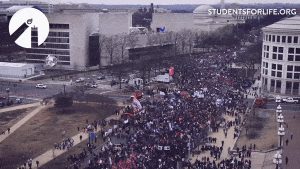 Perhaps the greatest miracle of all is that there is a pro-Life movement which refuses to bend the knee to Roe and what it has wrought for this society.

Posted in Uncategorized | Comments Off on Thank you, Mr. President