Abortion Lobby Shows up in Force

Legislation (SB1243) to expand Idaho’s Informed Consent Law had a formal hearing before the Senate State Affairs Committee on Monday morning. The Abortion Lobby showed up in force to urge the measure’s defeat.  One would have thought that Sen. Lori Den Hartog and the Pro-Life Lobby was about to repeal Roe v. Wade.

Instead, the modest legislation would require the State of Idaho to include information about the possibility that women and girls might be able to reverse the effects of RU-486 if they move quickly enough. It would become part of the State’s Informed Consent booklet, which the Abortion Industry must provide to each woman during the 24-hour waiting period.

But somehow this proposal to inform girls about their options is “anti-woman” and an “abuse of government power”. This may strike more casual followers of the abortion debate as rather strange and illogical.  But it is part and parcel of the battle.

The truth is, there is no more paternalistic and condescending crowd than the Abortion Lobby.

Monday’s show was stolen, however, by a remarkable young mother named Rebecca. She told committee members of her own experience with the Abortion Pill Reversal process.  At the age of 19, she became pregnant for the second time while in an abusive relationship.  She turned to Planned Parenthood because she was convinced that her only option was ending the baby’s life by using RU-486.  After taking the first pill in the Planned Parenthood office, she left with the second pill in a bag.  She began crying as she sat in her car, suddenly panicked over what she had done.  She began searching the internet on her phone, desperately seeking any advice or information about whether she could do anything to stop the abortion.  And she ran across a website telling her that there were doctors who had developed a protocol for overcoming the effects of the first pill if a mother moved quickly enough.

Rebecca found a doctor to help. And she experienced the miracle of motherhood again.  In fact, she brought her son Zechariah to the hearing – who spent most of the three hours sleeping in his mother’s arms.  He is a beautiful 3 or 4 year old boy. 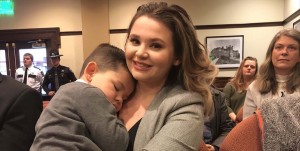 Yet the Abortion Lobby was not to be deterred. Despite the fact that living, breathing evidence sat in the front row of the hearing room – speaker after speaker told committee members that there was no science to back up the APR protocol, that it was not possible to reverse a chemical abortion once it had begun.  It was just astounding to see the triumph of ideology over fact for so many followers of Planned Parenthood.  They have some powerful Kool-Aid over on that side of the room, apparently.

SB 1243 was approved by the Senate committee on a party-line vote and is now pending on the Senate floor.

We commend Sen. Lori Den Hartog and Right to Life of Idaho for bringing the legislation, which we strongly support.

We also want to give thanks for the courage displayed by Rebecca.  May the Lord watch over her and bless her children.

Please take a moment to call or email your legislators about this important bill. Hopefully this proposal will lead to more miracle stories in the years to come.