With the release of candidate finance reports this week, we have learned a great deal about the race for the Supreme Court seat. The most startling fact is that the Idaho Trial Lawyers are engaged in a massive effort to place one of their own on the high court.

Robyn Brody, an unassuming attorney from Rupert, has shocked experienced political observers by amassing some $175,000 in her bid to win a seat on the high court. How could a first-time, unknown candidate for public office generate such a huge sum of money just weeks after announcing her candidacy?  The answer is found in the large number of law firms (29) investing money in her.

The speed with which Brody has raised and spent money strongly suggests that the Trial Lawyers have been planning this campaign for some time. In fact, it seems likely that they recruited Brody to run, a perfect unknown commodity who could sweep to a seat on the Idaho Supreme Court with the financial backing of dozens and dozens of criminal defense and plaintiff attorneys who desperately want, apparently, a friendly face on the highest court.  Their scheme hinges on a tidal wave of money to overwhelm voters before folks can figure out what is really going on.

We are also deeply troubled by the fact that Ms. Brody is being supported by a rather long list of liberal, pro-choice attorneys – like Rory Jones, lead attorney for Planned Parenthood in its current lawsuit against the state of Idaho.

Brody’s money pile also answers the question about the curious “rating” by members of the State Bar Association of the candidates. It is clearly implausible that attorneys from around the state would be in a position to offer objective ratings of the candidates based upon personal knowledge of them.  Now we know that it was the Trial Lawyers Assn. which Gerry-rigged the numbers that Ms. Brody is touting in her literature.

We don’t know what Ms. Brody’s values are, because candidates for the bench don’t answer such questions. But the list of her supporters should give Idahoans tremendous cause for concern.  And the biggest question we will have to answer next week is whether Idaho voters will allow the Trial Lawyers to buy a seat on the Supreme Court. 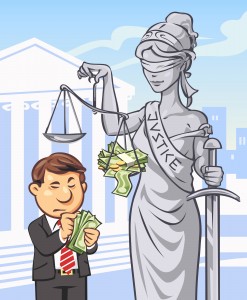