The trial going on in San Francisco is reminding America about the whole Planned Parenthood baby parts trafficking scheme. While the judge in this case is going to great lengths to shield the Abortion Industry from public scrutiny – details are seeping out of the courtroom.

Here is a new and sickening fact for you: Planned Parenthood clinics are selling the scalps of freshly-killed babies for profit; companies are buying the scalps to test products for treating baldness.

Let that sink in for a minute. Please.

Is it really possible that this kind of barbaric profiteering is tolerated in America?

We do, indeed, live in such a time. White has become black; evil is called “good”.  The people who traffic in aborted baby parts are the victims; those who expose their barbarity are on trial.

There were more revelations in court yesterday, as Planned Parenthood’s “star” victim took the stage to explain how she has been victimized by the undercover videos. Abortionist Deborah Nucatola became infamous when a video surfaced of her eating salad while discussing the procedures she uses to maximize organ harvesting from late term babies right before she snuffs them out.

She took the stand on Thursday, tearing-up as she told the jury that she has been personally and professionally damaged by the release of the video. One report indicated that she even worked up a sob or two.  But under cross-examination, Nucatola reportedly cracked when confronted with a prior deposition in which she contended that she had “done nothing wrong” and “didn’t care” if the

video of her luncheon were publicly released. 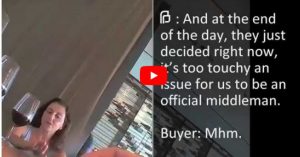 In a surprising move, the judge in the case, changed his mind and allowed the defendants to play the infamous video for the jury. It was the first time he has allowed any of the video evidence collected by the Center for Medical Progress to be introduced in the trial.

It is not hard to understand that Mrs. Nucatola is having a hard time with the truth in a courtroom. Research has come to light from Operation Rescue that she conducts something like 200 abortions each and every month.  Over the course of her 21 year killing spree – the estimate is that she has personally destroyed the lives of some 50,000 preborn children.

While it is easy to look at a person like Abortionist Nucatola as evil, the real challenge for all of us is to face the truth: She operates because we allow it. She is protected by the law and a media conspiracy of silence and deception; Nucatola is allowed to continue her ghastly butchery because too many of us are complacent in the face of pure evil.  American society has fallen into a deep tar pit from which it may not escape – certainly not without great cost.

May the Lord rescue us.