Norma McCorvey and Me

Left wing news sites are abuzz with claims that a new documentary shows Norma McCorvey in her last days confessing that she only played at being pro-Life for monetary gain.
Norma McCorvey is the woman used by the Abortion Industry to establish Roe v. Wade in 1973.

In that era, Norma McCorvey was a 21 year old woman with one daughter and pregnant with another. Her liberal attorneys persuaded her to claim that she had been raped, when in reality – all she really wanted was a divorce. She did get the divorce, but not the abortion. In fact, she never had an abortion and left behind three daughters.  Once she became the infamous “Jane Roe” … Norma became a celebrity within the pro-abortion community. She even worked for awhile in a Texas abortion clinic – and it was that brutal reality which finally broke her.

After years of being the poster girl for legalized abortion, the inner turmoil took its toll. Drugs, depression, alcohol, guilt. Norma turned to Christ in 1995.

So what are we to make of the comments cited by liberal media outlets? Here are the exact quotes we’ve found – though the film maker has not released an unedited version of his McCorvey interview:

“This is my deathbed confession,” she chuckles, sitting in a chair in her nursing home room while on oxygen. Nick Sweeney, the film maker then asks, “Did [evangelical Christians] use you as a trophy?”

“Of course,” Norma replies. “I was the Big Fish.”  [Courtesy of LifeNews.com].

Norma died in 2017. The first thing which occurs to me is that it is more than strange that this ostensible interview has not surfaced until now. My suspicion is that there is much more to this conversation than may ever be revealed.

As it turns out, I got to know Norma McCorvey a bit. She was our featured guest speaker at the 2010 Christmas Dinner. We spent the better part of a day and a half together, plus considerable time on the phone before her arrival in Boise.

Norma McCorvey was not the best speaker we’ve had. It was clear that she was a person who had lived a tough life, and had plenty of barnacles. To be even more honest, it seemed to me that she had not yet accepted all of the emotional and spiritual healing which Christ offers to those of us deeply wounded by sin. There was a certain distance and cynicism that came through, with a covering shadow of loneliness. But the testimony she delivered that Friday night was rough and real. The life she lived, almost completely dominated as it was by the horror of abortion, was also on display for people in the room – redemption and scabs and seeping wounds.

Some in the room were disappointed. But all of it made sense to me, for I knew her on a different level.

Norma and I came to the pro-Life movement at virtually the same time, after being publicly involved in promoting abortion as a matter of a woman’s “choice”. We both have spent years coming to terms with that b 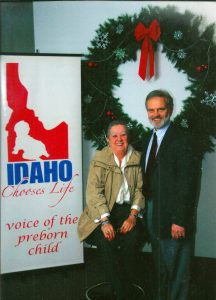 loody history, wrestling with the Great Accuser – who would deny us the blessing of Christ’s forgiveness and healing.

Imagine for a moment, if you can, what it would be like to be Norma McCorvey. Perhaps the most notorious woman in American history. In her name, the nation has welcomed the industrialized destruction of millions and millions and millions of preborn children. That is a torrent of blood guilt. She used drugs and alcohol to cope with it. She carried a lot of defensive mechanisms and resentments in her life, and I think some of those resentments came through in this last interview.

And then there is the simple fact that this interview took place at a time when Norma was frail.

The truth is, stories of spiritual redemption are rarely neat and linear – they are rarely a nice Christian movie. Two steps forward and one step back. Days of victory and days of defeat, as Christ carries us forward. But Norma McCorvey fought the good fight against the evil that still bears her name. She publicly confessed the deceptions she helped foster many, many times over the course of some 30 years – even testifying before the U.S. Senate, and petitioning the U.S. Supreme Court to reverse its perverse ruling.

I am confident that she is, finally, at peace in the arms of Christ.

Norma’s legacy is now left to us, to end the holocaust she helped unleash.

Posted in Uncategorized | Comments Off on Norma McCorvey and Me